The condition of over-developed or enlarged breasts in men(known as Gynecomastia Surgery), is common in men of any age. It can be the result of hormonal changes, heredity conditions, disease or the use of certain drugs. The surgery is performed on an outpatient basis under local anesthesia with sedation or general anesthesia. You can happily go home either on the same day of the surgery or an overnight stay may be required. All the normal activities can be resumed from next day.

“There is no other way like creams or oils etc to reduce the male breasts. Its all a marketing gimmick and waste of money & time. Beware of such kind of fake advertisements that claim to reshape your chest naturally. A boy 22 yrs of age who had Very large Male breasts developed skin burns when he tried to reduce breasts by using a so called, ‘slimming heat belt’.”

Ideally, the male chest is muscular and well defined. It signifies strength and masculinity. Sometimes, for various reasons, the male breast becomes fatty and begins to sag. Instead of a healthy masculine look, the man is left with an unhealthy, out of shape, feminine look. Gynecomastia (Enlarged Breasts in Male) is the abnormal development of large mammary glands & excessive fat deposits in males resulting in breast enlargement. The condition can occur physiologically in neonates (due to female hormones from the mother), in adolescence, and in the elderly. In adolescence and elderly, it can be an abnormal condition associated with disease or metabolic disorders, or it can be due to generalized obesity. In adolescent boys the condition is often a source of distress, but for the large majority of boys whose pubescent gynecomastia is not due to obesity, the breast development shrinks or disappears within a couple of years. The causes of common gynecomastia remain uncertain, although it has generally been attributed to an imbalance of sex hormones or the tissue responsiveness to them; a root cause is rarely determined for individual cases. Approximately 5-10% cases of gynecomastia are due to drugs specially steroids, aldactone (spironolactone) or some cardiac drugs like digoxin. Un-prescribed steroid intake by bodybuilders for rapid development of muscular mass is now a day commonly seen in this group of patients. Breast prominence can result from hypertrophy of breast tissue, chest adipose tissue (fat) and excessive skin, and is typically a combination.

The good news is that with modern plastic surgery, gynecomastia can be effectively treated so that you no longer have to be embarrassed to take your shirt off. The treatment of gynecomastia depends on what is causing the problem. The three components of gynecomastia are 1) excess fat, 2) excess breast tissue, and 3) excess skin.

Puffy Nipples is among the most common forms of gynecomastia. This glandular tissue accumulation is concentrated under and typically confined to the areola, or can be slightly extended outside the areola forming a dome shaped appearance to the areola. The surgical excision through peri-areolar incision or more recently through a barely visible trans-nipple incision is the treatment of choice and leads to rapid recovery and least scar.

Pure Glandular: In bodybuilders, this may be a result of the use of anabolic steroids. Due to excess testosterone levels from steroids, which are converted to estrogen, bodybuilders and other athletes are sometimes afflicted with gynecomastia in its purest form. Gynecomastia in lean men is usually only a breast tissue gland with little to no adipose tissue. Proper treatment of pure gynecomastia can be done only by excision of the breast tissue through practically invisible trans-nipple incision in selected group of patients.

Adolescent : Congenital or Hereditary Gynecomastia is typically evident by the ages of 12 to 18 in boys. Thirty percent to sixty percent of young boys suffer from large male breasts. As many as thirty percent may live with enlarged male breasts for the rest of their lives, but in other cases the gynecomastia will recede with age. However, severe forms of adolescent gynecomastia may require an intervention, in consultation with the patient, the parents.

Pseudogynecomastia : This is also known as "false Gynecomastia" and is often attributed by obesity. It is composed not of glandular tissue, but of adipose tissue mainly. Exercise and diet may be effective in combating pseudogynecomastia. Liposuction (using two tiny holes of 2-mm size) of excessive fat is the mainstay of treatment with very minimal scarring. You need to wear a pressure garment for 2-3 months after liposuction of the area.

Severe Gynecomastia is characterized by excess and/or saggy skin and severely enlarged breast. This is itself determined in part by age, as older persons suffering from gynecomastia tend to have less skin elasticity and thus will have a greater abundance of excess skin related to gynecomastia. Experienced plastic surgeons will perform as much of the surgical treatment of severe gynecomastia as possible through a combination of Liposuction to remove most of the fatty tissue and a peri-areolar incision to remove the glandular part & excess skin, so as to avoid extensive scarring. However, some scarring may be unavoidable when treating extreme cases of gynecomastia, where the skin is loose & hanging.

Are you a good Candidate for the procedure?

Men of any age who are healthy and emotionally stable are considered good candidates for male breast reduction surgery. The best candidates are those who have firm, elastic skin that will reshape to the body’s new contours. In some instances, surgery may be discouraged for overweight men who have not first tried an exercise and diet regimen.

The choices of Anesthesia include intravenous sedation and general anesthesia, your doctor will recommend the best choice for you.

In cases where gynecomastia is primarily the result of excess fatty tissue, liposuction techniques alone may be used. This requires insertion of a cannula, a thin hollow tube, through two small incisions. The cannula is moved back and forth in a controlled motion to loosen the excess fat, which is then removed from the body by vacuum suction.

There are various liposuction techniques that may be used; the technique most appropriate in your case will be defined prior to your procedure. Excision techniques are recommended where glandular breast tissue or excess skin must be removed to correct gynecomastia. Excision also is necessary if the areola will be reduced, or the nipple repositioned to a more natural male contour. Incision patterns vary depending on the specific conditions and surgical preference. Sometimes gynecomastia is treated with both liposuction and excision.

After surgery, dressings or bandages will be applied to your incisions and you will be advised to wear an elastic bandage or support garment to minimize swelling and support your new chest contour as it heals. A small, thin tube may be temporarily placed under the skin to drain any excess blood or fluid that may collect.

After the cosmetic procedure, you will likely to feel a little discomfort in raising your hands & feel mild stiffness and pain in your chest which will subside within 2-3 days. You will be given specific instruction to care the surgical site & medication to make you comfortable. All the normal office type activities can be resumed after 2-3 days while the heavy physical activities will be restricted for 4-6 weeks. A pressure garment is the most important thing after surgery, you will need to wear it immediately after the procedure for three months to minimize swelling & support your new chest contour.

Results of Gynecomastia Surgery are permanent, although subsequent obesity can create a gynecomastia-like effect. Some of the benefits of surgery include a firmer, flatter, more contoured chest which may give the male patient a boost in self-confidence. 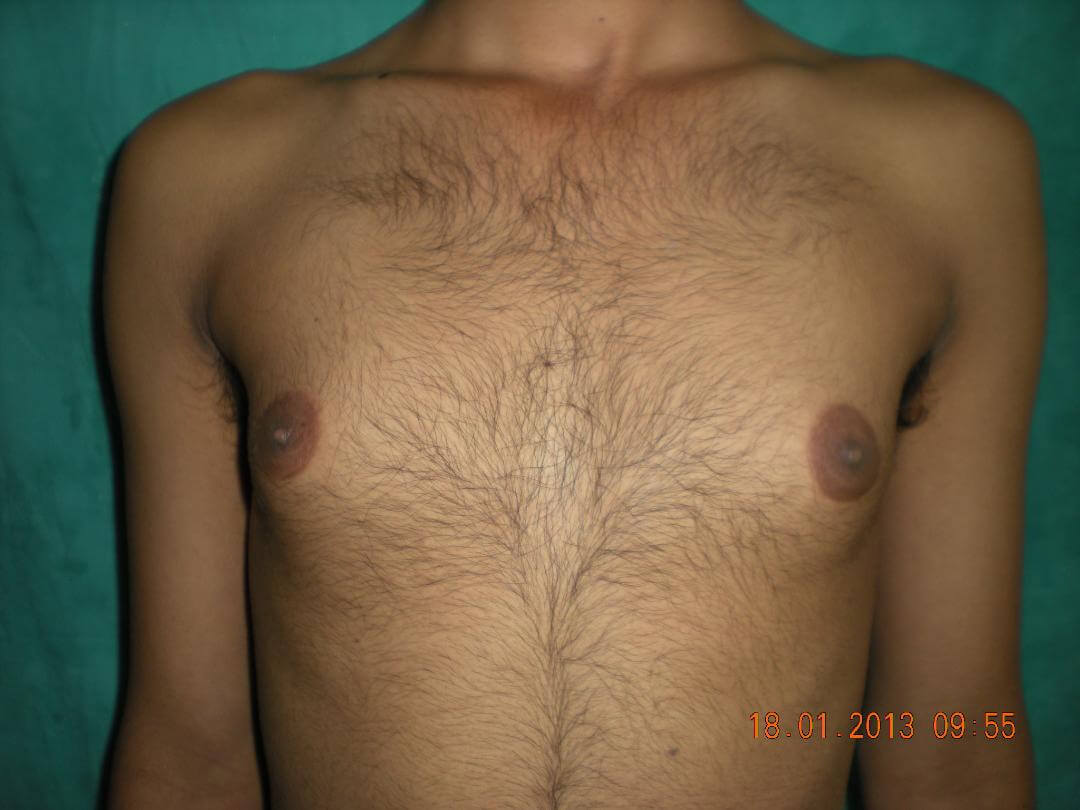 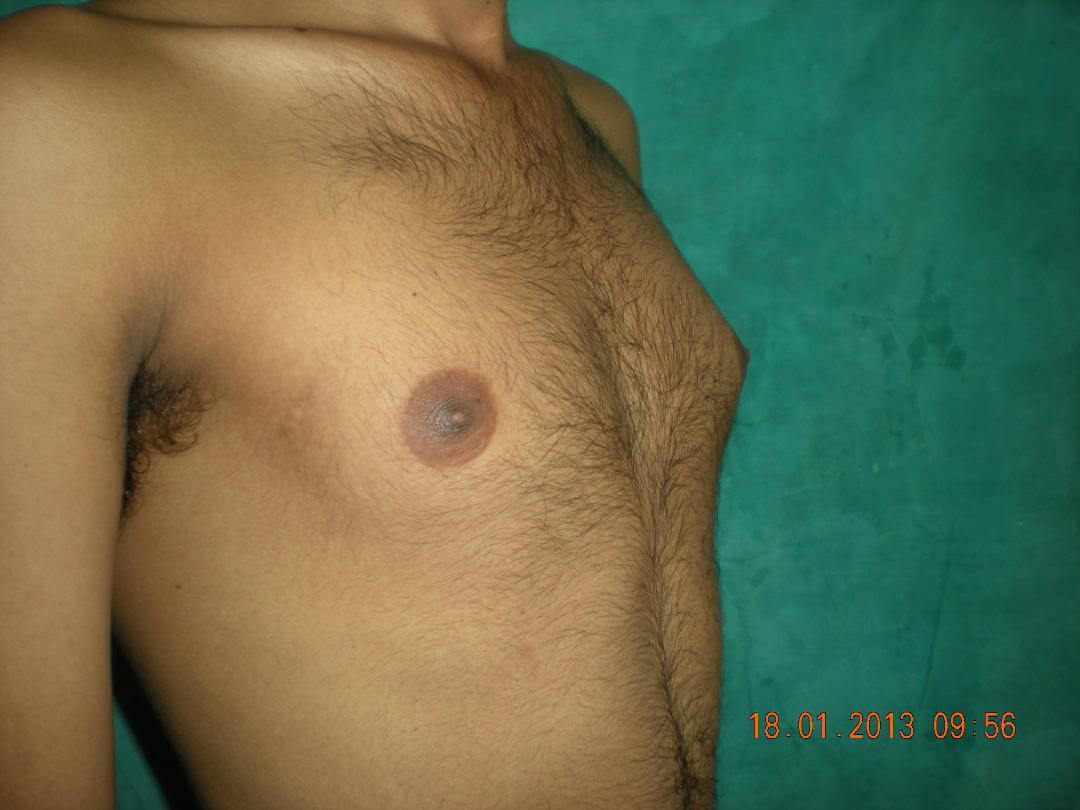 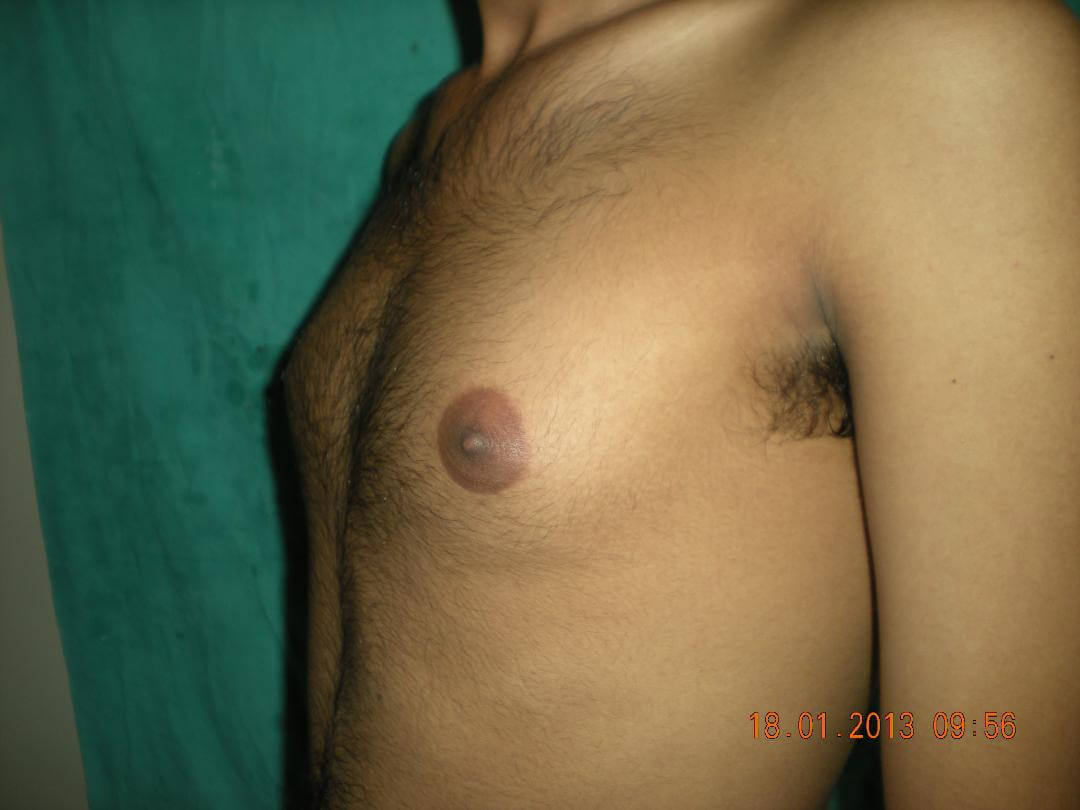 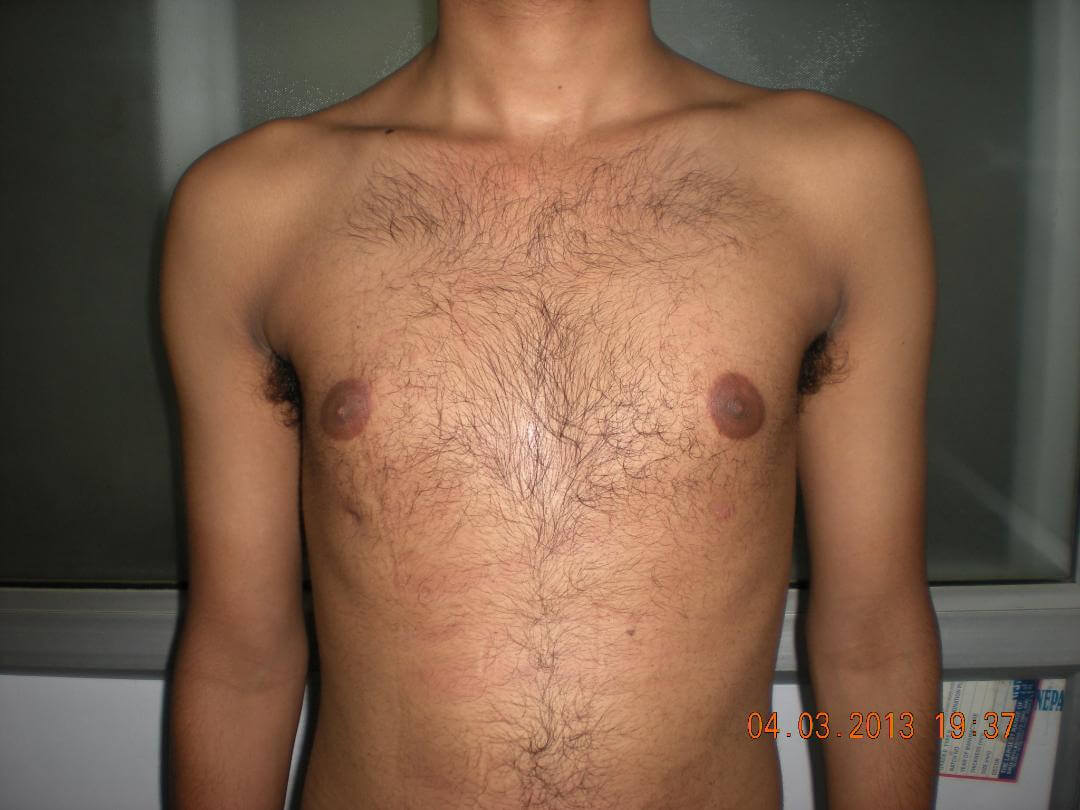 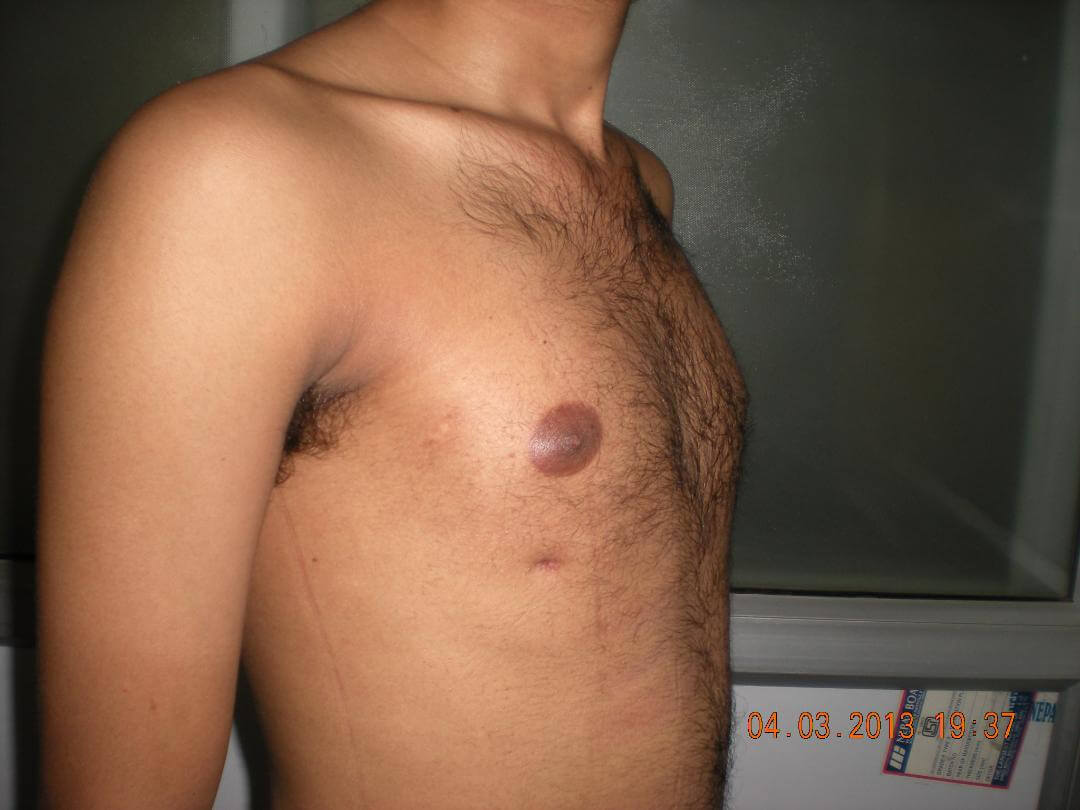 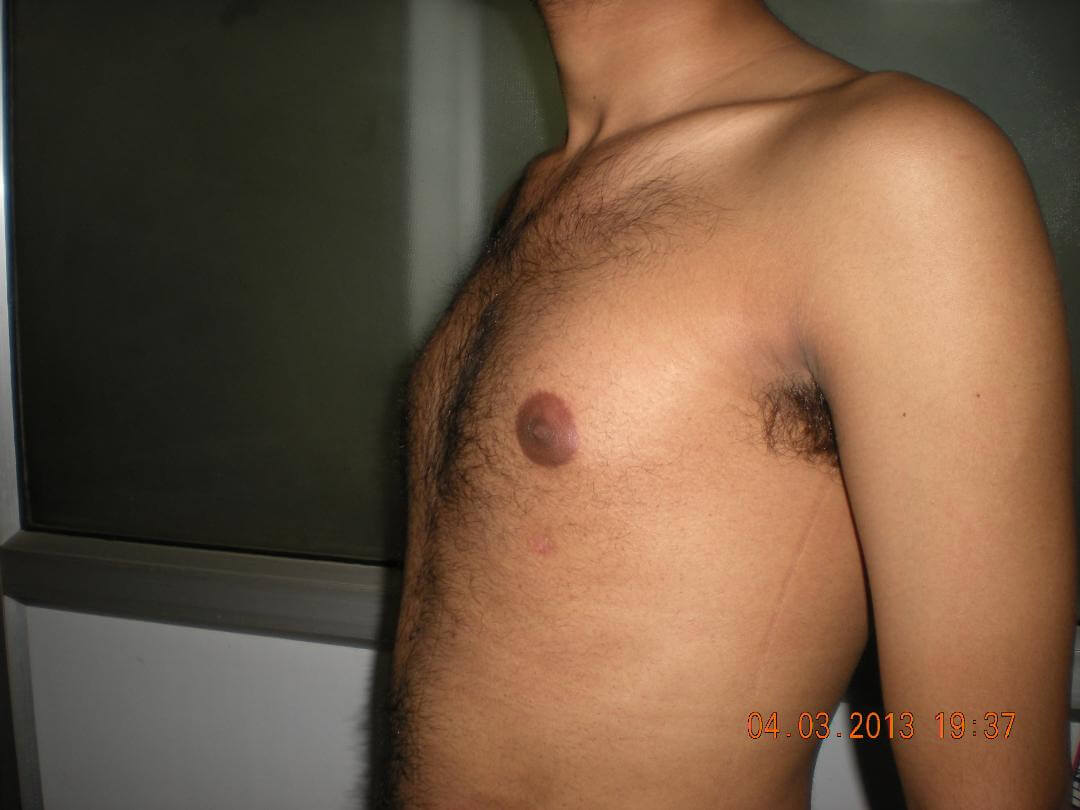